When night creatures are discussed, vampires and werewolves go side by side. These are humans, bitten by another werewolf, who transform into deadly wolves on the apex of the full moon enhancing the animalistic nature of man. Unlike Vampires who are constantly dealing with their nature being half monster and half human, a Werewolf only goes through this transformation once a month and reverts back. They are deadly, feed on humans and animals alike. Stronger, faster and sharper in all senses be it hearing, smelling or night visions compared to both humans and wolves. Like the vampires, they are sly and immortal.

No one can specifically point out in the history of myths as to where Werewolves transpired from or if there was any actual occurrence that could prove the existence of this metamorphosing creature. Historians seem to generally point towards Greek myths for werewolves, while their origins would be more believable if derived by the Native Americans or even certain African tribes who avidly believe in spirit animals and metamorphosis. Shamans are known for their concepts and belief in using metamorphosis as rituals for certain practices, and werewolves originating from their folklore would perhaps make more sense. But somehow the wrath of Zeus turning King Lycaon into a wolf who offended the Gods by serving them with human flesh, is perhaps where it begins, or at least in the books.

You might find more comfort in the idea of the werewolf being an amusing folklore that ancients perhaps told under starry nights gathered around the bonfire. Unfortunately, there are other stories attached to the name, just like witch trials, there were werewolf trials in quite a few European villages. Women, accused of being witches were also accused of being witches who 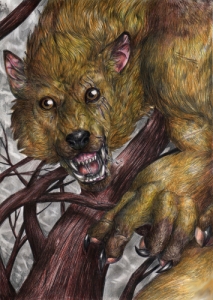 could turn into werewolves. Even though no solid evidence was found to prove these accusations, still people like Peter Stumpp from Germany, 1521 sinister duo Pierre Burgot and Michel Verdun, and 1573 Gilles Garnier were all accused and executed as murderous werewolves.

What is so fascinating about these fantasies and such fictional creatures? Is it the idea of living both in reality and fantasy simultaneously? Or somewhere in the subconscious, do we want to believe in the existence of such novelties?