The idea of making ourselves superhuman via technological advancements used to be a hypothetical concept. Becoming a cyborg has always been supported by a part of the population but considered taboo by others. Regardless of personal beliefs and opinions it is a concept that has started becoming a reality, much quicker than anybody really expected. Even though it is normally portrayed as ideas that will make our species more advanced, in reality they are also allowing people with disabilities to enjoy doing the things that the rest of us consider normal.

As this technology increases our cyborg prospects will expand rapidly, and eventually there may be full body enhancements that will be accepted as the norm. Until then, let’s look at some of the ones that have already begun to change our lives. 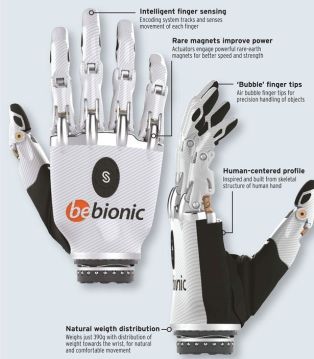 Prosthetic Limbs – One of the first set of experiments with cyborg technology included attempting to make artificial limbs that work as well as our human ones do. This gives amputees the opportunity to move in the best way possible.

The BeBionic limb is taking this goal to new heights. It is a prosthetic hand that’s connected to the wearer’s skin and muscles in their upper arm. It is operated via muscular movements, and each individual finger joint can be moved separately. This means that it enables amputees to do some of the things that other prosthetic hands don’t allow, such as being able to tie their own shoelaces.

Eyeborg – Designed by Neil Harbisson, an artist who was born completely colour blind, the eyeborg is a one of a kind invention. Harbisson wears a colour sensor that is mounted on an antenna on his head and then connected to a microchip in his skull. The sensor turns colours into sounds which he hears via bone conduction. This means instead of seeing colours he is actually hearing them. It took him a while to differentiate the different sounds each colour makes on the spectrum, but he is now able to recognise many more than the average person can see. After a battle between Harbisson and the British government, the eyeborg is now acknowledged as a part of his body.

RFID – Meaning radio frequency identification, these are chips that are imbedded between the index finger and the thumb. They allow the wearer to connect to Android devices, open doors, turn on lights and other useful every day activities. The surprising thing about having an RFID implanted is that it can be done anywhere, by anybody. There are even DIY kits available online for those that are daring enough to undertake the process themselves.

Terminator Lens – We all know about the terminators’ ability to zoom in on any object. As implied by its name this contact lens will do the same for the person wearing it. Even though it is not yet available for public purchase, it has been proven to work well. The terminator lens allows an individual to magnify their vision up to 2.8 times instantly, by using a liquid crystal shutter that is located in the lens itself. It works well in 3D glasses, but the manufacturers are still trying to come up with a way to put the crystal shutter in the softer plastic that is used to make normal contact lenses.

The human race has finally become advanced enough to begin to transform themselves. Let’s hope that with greater knowledge comes the acceptance of the added responsibility of using it wisely.