Scientists have proven that the Earth had existed for billions of years before the evolution of mankind. This means that humans are not necessary for the planet’s survival, but the perfect conditions need to exist for the continuation of our species. There have been many others on Earth which have become extinct for one reason or another. Humans are also susceptible to extinction, and some the biggest threats to our survival are:

Due to the fragility of the human body, our most deadly enemies are actually the ones that are physically the smallest, as we have found out over the last year. Microscopic viruses have proven fatal for a considerably large number of people worldwide and, even with our advanced medical knowledge, it is still possible for an infectious virus to develop and rapidly deplete a significant amount of the world’s population as it spreads. A virus’ survival instinct would not allow it to kill all its hosts, but a high percentage of the remaining human population would die as a result of events taking place due to so many other fatalities. An example would be the deaths of the elderly and extremely young, because of the absence of their caregivers.

Whenever a volcano erupts there is major damage done to the surrounding area. The last super volcano eruption occurred approximately 27000 years ago, and would have been responsible for an excessive amount of damage to the planet. Remnants of this eruption, and others, have provided geologists with clues about the devastation that would occur if one was to take place in the near future.

The blast would shoot approximately 1000 cubic kilometres of ash and rock into the air, and lava and debris would flow to cover an area larger than the European continent. Sulphur gases emitted would expand in the atmosphere, to create a thin layer of sulphuric acid that would reflect sunlight. With its source of heat blocked, there would be extremely cold temperatures (significantly below freezing) everywhere on the earth for between 5-6 years after the eruption. Only the most resilient and adaptive plant and animal life would survive.

Scientists have only been able to identify the location of a surprisingly few number of super volcanoes around the world, but are aware of the fact that there are many more. They have also concluded that there is no way to predict an eruption, as well as no means of preventing one from taking place. 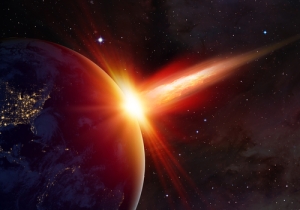 The diameter of the asteroid that is believed to have been the cause of the obliteration of the dinosaurs was approximately 6.2 miles in diameter. An asteroid that is 1 mile wide is expected to hit the earth at an incredible speed only once in every million years. The explosion on impact, as well as the after-effects (such as a worldwide ice age, acid rain and rampaging fires) would ensure that humans follow the dinosaurs to their unfortunate demise.